An infectious outbreak can have serious impacts on your business, from the costs of absenteeism and lost productivity, to negative client perception. Solair - provide non-toxic fumigation solutions to manage cold & flu outbreaks quickly, effectively and safely, getting your business back up to speed in no time.

Chlorine Dioxide - Where is it Used? How does it Work?

Chlorine dioxide (ClO2) is a yellow-green gas with an odor similar to chlorine with excellent distribution, penetration and sterilization abilities due to its gaseous nature. Although chlorine dioxide has chlorine in its name, its properties are very different, much like carbon dioxide is different than elemental carbon. Chlorine dioxide has been recognized as a disinfectant since the early 1900s. It has been demonstrated effective as a broad spectrum, anti-inflammatory, bactericidal, fungicidal, and virucide agent, as well as a deodorizer, and also able to inactivate beta-lactams and destroy both pinworms and their eggs.

As can be seen in the chart above, the size of a chlorine dioxide gas molecule is 0.124 nm, much smaller than microorganisms and viruses, allowing the gas to easily penetrate into any areas where these microorganisms might be concealed.

Although chlorine dioxide has "chlorine" in its name, its chemistry is radically different from that of chlorine. When reacting with other substances, it is weaker and more selective, allowing it to be a more efficient and effective sterilizer. For example, it does not react with ammonia or most organic compounds. Chlorine dioxide oxidizes products rather than chlorinating them, so unlike chlorine, chlorine dioxide will not produce environmentally undesirable organic compounds containing chlorine. Chlorine dioxide is also a visible yellow-green gas allowing it to be measured in real-time with photometric devices.

Chlorine dioxide (ClO2) acts as an oxidizing agent and reacts with several cellular constituents, including the cell membrane of microbes. By "stealing" electrons from them (oxidation), it breaks their molecular bonds, resulting in the death of the organism by the breakup of the cell. By altering the proteins involved in the structure of microorganisms, their enzymatic function is broken and causes very rapid bacterial kills. This oxidative attack on many proteins simultaneously is behind the potency of chlorine dioxide and also prevents microorganisms from mutating to a resistant form. Because of the selective reactivity of chlorine dioxide, its antimicrobial action is retained longer in the presence of organic matter than most other decontaminating agents.

INACTIVATION OF SPORES VS. BACTERIA

The difference between spore and bacterial inactivation is the same as the difference between sterilization and disinfection. For a chemical agent to be classified as a sterilant, it must be demonstrated to be effective at inactivating spores. Spores are among the hardest organisms to kill and for this reason sterilizing agents are considered the most rigorous decontaminating agents and offer complete kill of all antimicrobial life. Disinfection, on the other hand, does not require the complete inactivation of spores or all microbial life and is normally validated against a few vegetative bacteria species. For this reason, disinfecting agents are less rigorous decontaminating agents and are not as effective as sterilizing agents.

"Bacterial endospores are one of the most persistent forms of microbial life and typically require aggressive inactivation procedures. Vegetative bacteria are generally much more easily inactivated than are bacterial endospores. This is primarily because the sensitive areas of bacteria are easily contacted by chemo sterilizing agents. The spore, however, has a more complex structure than the vegetative bacterial cell. Its sensitive material is contained within a core and that core is surrounded by a cortex and spore coats. These coats tend to act as a permeability barrier to the entry of chlorine dioxide and other compounds" (Knapp, 2000).

Chlorine dioxide's special properties make it an ideal choice to meet the challenges of today's environmentally concerned world and is an environmentally preferred alternative to elemental chlorine. When chlorine reacts with organic matter, undesirable pollutants such as dioxins and bioaccumulative toxic substances are produced. Thus, the EPA supports the replacement of chlorine with chlorine dioxide because it eliminates the production of these pollutants. It is a perfect replacement for chlorine, providing all of chlorine's benefits without any of its weaknesses and detriments. Most importantly, chlorine dioxide does not chlorinate organic material, eliminating the formation of trihalomethanes (THMs), haloacetic acids (HAAs) and other chlorinated organic compounds. This is particularly important in the primary use for chlorine dioxide, which is water disinfection. Other properties of chlorine dioxide make it more effective than chlorine, requiring a lower dose and resulting in a lower environmental impact.

Chlorine dioxide is widely used as an antimicrobial and as an oxidizing agent in drinking water, poultry process water, swimming pools, and mouthwash preparations. It is used to sanitize fruit and vegetables and also equipment for food and beverage processing and widely used in life science research laboratories. It is also employed in the healthcare industry to decontaminate rooms, pass throughs, isolators and also as a sterilant for product and component sterilization. It is also extensively used to bleach, deodorize, and detoxify a wide variety of materials, including cellulose, paper-pulp, flour, leather, fats and oils, and textiles. Approximately 4 to 5 million pounds are used daily.

CHLORINE DIOXIDE IS NOT CORROSIVE

For most chlorine dioxide liquid solutions, it is these two acidic by-products, acidified sodium chlorite and chlorous acid that give the solution its low pH (typically around 3) and corrosive properties. However, pure chlorine dioxide of the type generated by Zydox has a non-corrosive neutral pH of 7 when dissolved in water and is gentle on materials. The table below shows common decontaminating agents and their oxidation (corrosion) potential. A higher oxidation potential means that the agent is a stronger oxidizer and thus more corrosive. As can be seen, chlorine dioxide is less corrosive than most of the common decontaminating agents.

Fact: Chlorine dioxide gas DOES NOT react with water. It stays as a dissolved chlorine dioxide gas in water much like how carbon dioxide is dissolved in carbonated beverages. This unique property allows it to stay effective in solution and kill microorganisms both in the water and on surfaces this water touches. Chlorine dioxide is different than chlorine (which does react with water to form hydrochloric acid) in the same was as carbon dioxide is significantly different than elemental carbon or how diamonds are not at all similar to graphite. Hydrochloric acid CANNOT and WILL NOT be formed in water when using Zydox' pure chlorine dioxide.

Myth: Chlorine dioxide gas is not safe on electronics

It has been shown from the US EPA shows that Hydrogen Peroxide (H2O2) is more corrosive than Chlorine Dioxide (ClO2).

*Over time, oxidizers will oxidize; ferrous metals and other sensitive materials may be affected. This goes for all oxidizers, including both chlorine dioxide and hydrogen peroxide. As shown in the chart at the top of this page however, chlorine dioxide has a lower oxidation potential than other commonly used agents.

What does it kill? 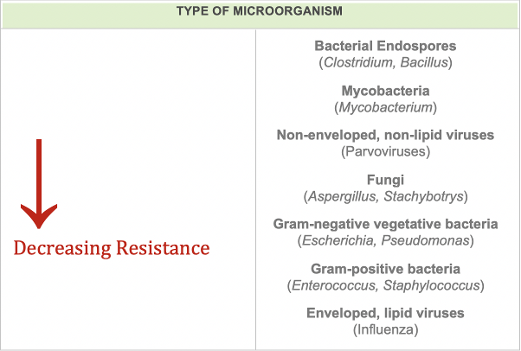 Chlorine dioxide gas is registered with the United States Environmental Protection Agency as a sterilizer. The US EPA defines a sterilizer as able "to destroy or eliminate all forms of microbial life including fungi, viruses, and all forms of bacteria and their spores," meaning Zydox' chlorine dioxide (ClO2) gas will inactivate any form of antimicrobial life including spores. Testing has been done using chlorine dioxide on a multitude of specific organism types, and that information can be found in the Biological Efficacy List. As testing is constantly ongoing, this is not to be thought of as a complete list of organisms in which chlorine dioxide gas is effective against.

The Exposure step is controlled through an "area under the curve" accrual of gas concentration until a target dosage has been met.

Raising of relative humidity (RH) levels to between 60-75%.

Hold time once relative humidity set point has been reached.

Hold time once gas concentration set point has been reached.

Chlorine dioxide is a true gas at ambient temperature

Solair using Zydox Solutions’ gaseous ClO2, is the safest and most effective way to decontaminate your BSL-3 and BSL-4 laboratories, passthroughs, chambers, biological safety cabinets, HEPA filters and any other lab spaces. Chlorine dioxide gas is gentle on materials so animal racks, cages, computers and other sensitive equipment can be left in these areas during the decontamination process. In new or renovated facilities, all your brand-new equipment can be brought in, gassed and sterilized in place thus eliminating the need for time consuming and costly autoclaving during move-in. In your existing laboratories, rooms and equipment can be decontaminated all together in one single step. 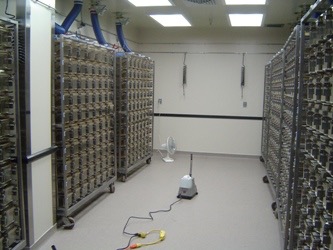 Chlorine dioxide gas fills the space it's contained within completely and evenly, ensuring that no matter how large the target space is, or how much equipment is within the space, no surface is left untouched. Traditional room decontamination times are approximately 2.5-3.5 hours depending on their size and the accompanying air handling unit.

Chlorine dioxide gas fills the space it's contained within completely and evenly, ensuring that no matter how large the target space is, no surface is left untouched; including crevices and harbor locations. ClO2 Gas has successfully treated many facilities to eliminate pathogens and pinworms, and new facilities to establish sterility, as well as facilities undergoing renovation.

Zydox Chlorine Dioxide can also decontaminate multiple mouse breeding facilities, eliminating pinworms, moulds, and other contaminants. Depending on the size, facility decontamination can take place using our equipment or through our decontamination services.

For applications where the entire room does not need to be decontaminated, equipment can be tented and fumigated in place. This allows for a smaller volume to be treated, lowering treatment times and costs compared to decontaminating the entire room.

With a proper seal, production and other work can take place in the same room as the tented equipment undergoing decontamination.